Gravida is part of the current Women in Pregnancy project funded by the Arts Council of Wales.

The creative collaborators for Gravida are taikabox, Chapter and our host company the Republic of the Imagination. 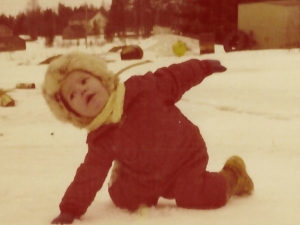 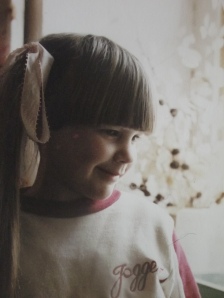 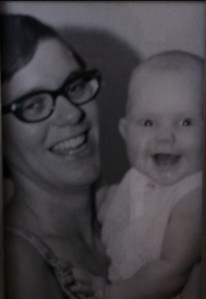 Frances Medley – Creative Producer (I know this is the title I have been given and its on the fliers and all but I have to say I feel a bit of a fraud using this description as my role is no where near as important as real CP’s on bigger projects! Ooh the expectations are a tad overwhelming so I hope I don’t disappoint!)

I couldn’t decide whether to use a baby photo or one of me as a child so as administrator of the project I thought I take advantage and use both. Oh how much cute I was in those days! My memory actually relates to this childish photo and the dress I’m wearing. The dress was made by my mother when my beloved Granny was coming to Malawi to visit. The problem was my mum loved the floral fabric but there wasn’t quite enough but she went ahead with it anyway. As a consequence the dress was rather short; little more than a crotch grazer in 2000’s language but I was only 5 or 6 so it was deemed acceptable although I remember being a bit self conscious! The irony was that in the 1970s in Malawi girls over the age of 12 (I think it was) had to wear long dresses perfect for the maxidress as long as it didn’t have a halterneck of course. I have an overriding memory of a friend at school disappearing one day, not literally evaporated but she no longer came to school because her mother had been seen in public in a halterneck dress and the family was deported from the country. President Hastings Kamuzu Banda had some strange ideas so it amuses me that the current saviour of Malawi is also called Banda (Joyce Banda). Banda is a common name including David Banda adopted by Madonna from Malawi.

Leah aka LMHC – Digital Image Maker: I remember the garden of my childhood; we had wild strawberries that grew down the wall and across the little garden path; we had grapes and honeysuckle growing over the wall from next door, we had raspberries and blackberries in autumn; I planted marigolds under the apple tree and I climbed the apple tree and made up epic love songs; I had a vegetable patch it had courgettes, aubergines, peppers and tomatoes – basically all the ingredients for my mum to make her ratatouille – I could tell you where in the garden my vegetable patch was – the dress I would wear when I tended to it – a grey cotton dress that I called my cinderella dress (I always wore this when I was helping to clean the house and dig in the garden). However – in recent years – I was told that there never were any wild strawberries or a vegetable patch in the garden – as for the rest – I got very upset when the slugs ate my marigolds and some of my mum’s neighbours still don’t let me forget that I used to sing in the apple tree!!!!

John Collingswood – taikabox – Photographer/Film Maker: One of my earliest memories is of being transported around town in a little pushchair, not being able to see anyone I knew, being pushed out into a busy road – at eye level with belching exhaust pipes – like some tiny sacrificial offering, and thinking: “Mom – how could you do this to me?”

Marega Palser – Visual Artist/Performer – Mr&Mrs Clark: Early memories include : My red Wellies (shown here in this photo taken by my grandma who had a box shaped camera in which you appeared upside down); my Uncle Roger ( who looked like Elvis ) making me laugh and I pissed my knickers; dreaming that the Devil was smacking my arse.

Iwan Brioc – The Republic of the Imagination: Maybe this is cheating.  It’s not an old photo.  In fact it’s a collage of photos and I took them all last week. They are photos of a tree trunk in a wood near where I grew up.  Cardiff before the 17th century was almost all ancient woodland and there still remains some tiny patches of that great forest to this day.

I spent most of my free time in this wood climbing trees, making obstacle courses, pretending to be Indiana Jones and later on making my own films there, which usually involved chases.

The size of this small wilderness in the middle of a faux victoriana suburb from the seventies is greatly diminished by encroaching brick coloured brick cul de sacs. And the conservation volunteers have gritted the paths that I macheted through the undergrowth all that time ago.  But there remains this ancient fossil at its centre, unchanged.  A fallen tree as solid and dead and old as it was when I was young, rising from a treacherous ravine I must traverse every day on my way back from school.  Of course, there was a path around, but where was the adventure in that. It’s a thing of wonder, a carcass so full of life.